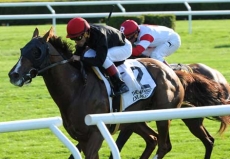 On Saturday at Gulfstream Park, turf horses will take center stage in the 33rd edition of the $300,000 Gulfstream Park Turf Handicap. The Grade 1 event, scheduled to be run at a mile and an eighth, has drawn a field of nine.

Imagining, the runner-up in the 2014 Gulfstream Park Turf Handicap, has been named the morning line favorite at odds of 3-1 for trainer Claude McGaughey, III. A seven-year-old son of Giant’s Causeway bred and owned by Phipps Stable, the Grade 1 winning millionaire will be making his first start since finishing seventh in the Breeders’ Cup Turf (G1). He has been training steadily since that race and will have regular rider Joel Rosario aboard from post position three.

Second choice at 7-2 on the morning line is Mshawish for trainer Todd Pletcher. A five-year-old son of Medaglia d’Oro, he has won five of his sixteen starts and comes into this race off of back to back victories over the Gulfstream Park turf. He was last seen winning the Ft. Lauderdale (G2) as the favorite by a neck over a field of eleven rivals. Javier Castellano will remain aboard and they are scheduled to break from the rail.

Also in the field at morning line odds of 8-1 is War Correspondent for trainer Christophe Clement.  The five-year-old son of War Front is a full brother to multiple Grade 1 winner Declaration of War and will be trying to earn the first graded stakes victory of his career.  He returned to action in September off of an extended layoff with a victory against optional claiming company and followed that up with a runner-up finish in the Autumn (G2). Joe Bravo has the mount from post six.