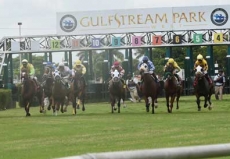 On Saturday at Gulfstream Park, the stakes action will continue with the $100,000 South Beach Stakes. Carded at seven and a half furlongs on the turf, the stakes race has drawn a field of ten fillies and mares

Hope Cross (IRE) tops the competitive field as the morning line favorite at odds of 7-2 for trainer Chad Brown. A four-year-old daughter of Cape Cross (IRE), she has been on the board in nine of her eleven starts and is a three-time winner. Last time out, she stepped up to stakes competition for the first time and finished second in the My Charmer Handicap (G2) at Gulfstream Park West. Joe Bravo will be in the irons from post position six as she tries for her first stakes victory.

Second choice at morning line odds of 4-1 is Dauphine Russe (FR) for trainer David Jacobson. A five-year-old daughter of Russian Blue (IRE), she is a four time career winner and has been on the board in four of her seven starts this year with one victory. She is trying for her first black type win and is stepping back up to stakes company after winning an optional claiming race at Belmont Park. Javier Castellano will be aboard and they will break from the rail.

Also in the field at morning line odds of 8-1 is Tuttipaesi (IRE) for trainer Bill Mott. A five-year-old daughter of Clodovil (IRE), she has been on the board in nine of her fourteen starts and has five victories. She earned her first win in over two years last time out in the Suffolk Downs Distaff Turf Stakes at Suffolk Downs in October. Chris DeCarlo will be aboard and they are scheduled to break from post position eight as she goes for two in a row.