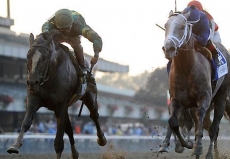 On Saturday at Belmont Park, the stakes action will begin with the $400,000 Kelso Handicap. Scheduled to be run at one mile on the main track, the Grade 2 event has drawn a field of seven colts and geldings.

Honor Code headlines the field as the overwhelming favorite at odds of 3-5 for trainer Claude McGaughey, III.  A four-year-old son of A.P. Indy, he has won six of his nine starts and is regarded as one of the top older horses in the country. He is coming into this race off of back to back Grade 1 victories and was last seen winning the Whitney Stakes (G1) at Saratoga. Regular rider Javier Castellano will be aboard and they will break from post position two.

Second choice at morning line odds of 5-1 is Red Vine for trainer Christophe Clement. A five-year-old son of Candy Ride (ARG), he has been on the board in sixteen of his eighteen starts and is trying to earn the first graded stakes victory of his career. A five-time winner, he was last seen finishing third in the Pacific Classic (G1) behind champion Beholder. Joel Rosario will be aboard and they will break from post position five.

Also in the field at morning line odds of 8-1 is Tamarkuz for trainer Kiaran McLaughlin. A five-year-old son of Speightstown, he has won seven of his fifteen starts and will be attempting to notch his first black type victory in the United States. He has been off the board in both recent starts against graded stakes competition since making his stateside debut after racing primarily in Dubai. Irad Ortiz, Jr. will be in the irons and they will break from post four.