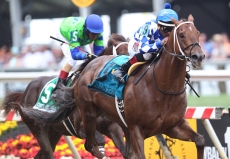 On Saturday at Saratoga, the stakes action will kick off with the $200,000 Amsterdam Stakes. A Grade 2 race for three-year-olds, the six and a half furlong contest has drawn a field of seven colts and geldings.

Holy Boss has been tabbed as the morning line favorite at odds of 5-2 for trainer Steve Asmussen. A chestnut son of Street Boss, he was purchased for $135,000 as a yearling and has won four of his seven starts. He comes into this race with three consecutive victories and was last seen winning the Chick Lang Stakes at Pimlico in May. He has been training steadily and will have Ricardo Santana, Jr. aboard from the outside post.

Chad Brown will saddle March as the second choice at odds of 3-1 on the morning line. Purchased for $320,000, the dark bay son of Blame has won three of his five starts and comes into this race off of back to back graded stakes victories. Last time out, he pulled off the upset at odds of 10-1 to win the Woody Stephens (G2) by a nose. Irad Ortiz, Jr. will remain aboard and they will break from post three.

The Great War returning off of six-month layoff

Also in the field at morning line odds of 10-1 is The Great War for trainer Wesley Ward. A bay son of War Front, he was purchased for $1 million as a yearling and has won four of his ten starts. He will be making his first start since a disappointing tenth-place finish in the John Battaglia Memorial Stakes in February. Joel Rosario will be in the irons and they will break from post position six.