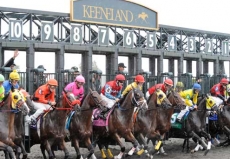 On Saturday at Keeneland, the graded stakes action will continue with the $250,000 Commonwealth Stakes. Carded at seven furlongs on the main track, the Grade 3 race has drawn a field of ten colts and geldings.

Holy Boss headlines the wide open field as the morning line favorite at odds of 3-1 for trainer Steve Asmussen. A four-year-old son of Street Boss, he has been on the board in seven of his eleven starts and is trying to earn his sixth career victory. He was a graded stakes winner as a three-year-old and has been on the shelf since finishing fourth in the Breeders’ Cup Sprint (G1) which was held last year at Keeneland. Florent Geroux will be aboard and they will break from post position nine.

Ready for Rye rounding back to consistent form

Second choice at morning line odds of 7-2 is Ready for Rye for trainer Tom Albertrani. A four-year-old son of City Zip, the chestnut gelding has been on the board in ten of his eleven starts and is a five-time winner. He returned to action off of a four-month layoff last time out and was third in the Gulfstream Park Sprint Stakes (G3). Javier Castellano will be aboard and they will break from post position two.

Also in the field at morning line odds of 6-1 is Clearly Now for trainer Ron Faucheux. A six-year-old son of Horse Greeley, he is a multiple graded stakes winner with seven total career victories. He will be making his first start at Keeneland and is trying to improve off of a seventh-place finish in the Duncan F. Kenner Stakes last time out at his home base at Fair Grounds. Jose Valdivia, Jr. will be aboard from the rail.