Heart To Heart Goes For Stakes Trifecta in 2016 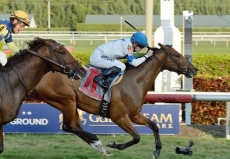 With a field of nine veteran runners set to contest the 54th running of the Grade 3, $150,000 Canadian Turf February 26 at Gulfstream, the race shapes up as one of the more intriguing handicapping puzzles on a card loaded with stakes action.

2/1 favorite Heart to Heart is in career-best form and once again appears to be the controlling speed of the field, following his gate-to-wire win January 16 in the Grade 2 Fort Lauderdale. The win was the Brian Lynch trainee’s second consecutive stakes victory in as many tries this year and flattered the five year-old son of English Channel as the second-place horse, Luke’s Alley, came back to win the Grade 1 Gulfstream Park Turf in his next start. Heart to Heart, ridden by Julien Leparoux, will break from post 6 as he tries to improve upon his career record of 8 wins in 19 starts and become the first three-time graded stakes winner of the year.

When in top form Avanzare (4/1) has proven to be a top class miler on the west coast, winning the Grade 2 Del Mar Mile August 23 and Grade 2 Arcadia in January of 2015. The Thomas Proctor trainee has not raced since finishing fifth in the Grade 2 Seabiscuit November 27 at Del Mar and may need a race under his belt despite the trainer’s excellent 22% success rate with runners returning from 61-180 day layoffs.

Tower of Texas (5/1) is another returning from a layoff as the Canadian-based horse has not seen action since his seventh-place effort in the Grade 1 Woodbine Mile. The Roger Attfield runner may be a cut below the top contenders here even if he is able to fire his best effort off the bench.