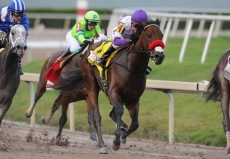 In one of the most anticipated runnings of the Haskell in years, Kentucky Derby winner Nyquist (6-5) and Preakness winner Exaggerator (5-2) are set to renew their rivalry on Sunday at Monmouth. Coming out of the Derby, Nyquist looked unbeatable, and the qustion is whether his third-place showing at Pimlico is a sign of regression, or simply the fact that he had a bad day running on an off track that set up perfectly for his nemesis.

The betting here is that the former is true, with the expectation we're going to see a return of the pre-Preakness Nyquist. Time and time again he has shown he the better of the two, finishing ahead of Exaggerator four times before the Preakness, while Exaggerator's most recent wins have come in races that set up perfectly for him, with plenty of pace on off tracks. Unless it's raining Sunday at Monmouth, expect he'll be playing second fiddle again.

Of the others in the field, Gun Runner (4-1) is a very good horse who has shown that he just doesn't have the speed to keep up with Nyquist. He had every opportunity to do so in the Derby, in fact holding a slim lead over Nyquist at the quarter pole, but could not hold him off. He's since come back to win the (G3) Matt Winn Stakes with ease, but nothing in that field resembles the top choice here. The other with low odds in the Haskell at 3-1 is the lightly raced American Freedom, who has 3 wins in 4 lifetime starts. His latest came in a romp in the (G3) Iowa Derby, but as is the case with Gun Runner's latest effort, nothing in that field resembled Nyquist, and he's stretching out past 1 1/16 miles for the first time in his career.