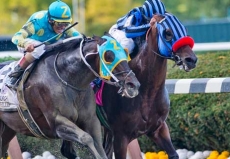 With impending rain coming at Keeneland on Saturday morning, Private Zone went out for his workout before the track was sealed and breezed three furlongs in an easy :35.77 with a strong, enthusiastic gallop out.

The six-year-old gelding is scheduled to compete in the $1.5 million Breeders’ Cup Sprint (G1) on Saturday, October 31.Though more of a seven-furlong specialist, he has been on the board in nine of his eleven tries at the distance of six furlongs and is a four-time winner. This will be his third Breeders’ Cup appearance – he was tenth in the 2013 edition of the Sprint (G1) and turned in a game effort last year to finish third.

Private Zone in sharp form after back to back stakes wins

This year, the front-running gelding has been in exceptional form for trainer Jorge Navarro and has three wins from five starts. Both of his losses came behind top Breeders’ Cup Classic (G1) contender Honor Code in one mile races, the Gulfstream Park Handicap (G2) and the Met Mile (G1). He is coming into the Breeders’ Cup Sprint (G1) off of two straight graded stakes victories and has been training forwardly at Keeneland since his last race.

The veteran gelding may face his strongest opposition in the Sprint (G1) from a colt half of his age – Runhappy, the brilliantly fast three-year-old. The bay colt has won his last four races including the Odgen Phoenix Stakes (G3) at Keeneland last time out. He has been lighting up the worktab in the mornings and has clocked three consecutive bullet workouts. He will likely be ridden by Edgar Prado while Private Zone will have regular rider Martin Pedroza aboard.