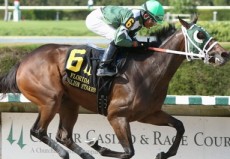 On Friday at Saratoga, three-year-old fillies will take to the turf in the 6th edition of the $100,000 Riskaverse Stakes. The mile contest will be run on the inner turf course and has drawn a field of seven with one additional filly entered for the main track only.

Topping the field at morning line odds of 9-5 is Granny Mc’s Kitten, a homebred daughter of Kitten’s Joy owned by Ken and Sarah Ramsey. Trained by Chad Brown, the bay filly will have Javier Castellano back aboard after the pair teamed up to win against optional claiming competition as the heavy favorite last out. She has won two of her seven starts and broke her maiden as a juvenile in the P.G. Johnson Stakes last summer.

Miss Frost going for three wins in a row

Miss Frost is the second choice at odds of 3-1 for trainer Tom Albertrani and will break from post position two. Edgar Prado will be aboard carrying the green and yellow silks of Cot Campbell’s Dogwood Stable as the pair go for their third consecutive victory. A $105,000 purchase as a juvenile, the chestnut daughter of Curlin has won three of her nine starts with two of those victories coming at Saratoga.

Also in the field is longshot Scandalous Act at odds of 15-1 on the morning line. Trained by Kathleen O’Connell, the dark bay filly will try to improve off of an eighth-place finish in the Cash Run Stakes in her most recent start. Bred and owned by Gilbert Campbell, she's by Act of Duty and will be making her first start on turf after earning four wins on dirt as a juvenile. Jose Lezcano will be aboard for the first time and the pair will break from the outside.