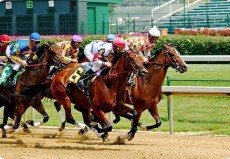 September6 is day two of the Churchill Downs September meeting and includes four stakes races – three of which are grade events – starting with the $100,000 Ack Ack Handicap in race four run at one mile on the main track.

The Ack Ack draws a field of five, but what it lacks in quantity, it compensates for with quality.  Bradester, the 2/1 morning line favorite for trainer Eddie Kenneally, is in the best form of his career coming off consecutive monster efforts in the  Grade III Salvator Mile and Grade II Monmouth Cup in New Jersey.  Despite runner-up finishes in both races, the four year-old colt earned Beyer speed figures of 100 and 108 respectively.  In the Salvator Mile, Bradester finished just a length and a half behind It’smyluckday who went on to capture the Grade I Suburban.

Flashback looking to shake off some rust

Flashback and Carve are co-second choices on the morning line at odds of 5/2.  Flashback will break from the rail post as he makes his first start since the Grade I Malibu Stakes December 26 at Santa Anita.  Flashback finished fourth in that race as the favorite and is now trained by Wayne Catalano after making all six of his career starts for Bob Baffert.  Carve comes into the Ack Ack on a three race winning streak for trainer Brad Cox including a pair of narrow wins in the Cornhusker Handicap and West Virginia Governor's.

It’s worth noting that Carve began his winning streak with an impressive win against $80,000 optional claiming foes June 14 at Churchill going a mile on the main track.