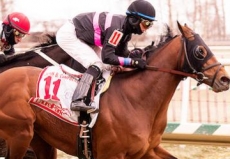 The $250,000 Grade 3 General George Stakes is the featured race February 15 at Laurel as a field of nine veterans will contest the seven furlong sprint on the Monday President’s Day card.

9/5 favorite Green Gratto has gotten good in his last four races, recording a pair of stakes wins to go with a second-place effort and a third-place finish last-out in the Grade 3 Toboggan Stakes January 30 at Aqueduct. The Gaston Grant trainee has not raced outside of New York since 2014, but seems likely to take his customary spot on the early lead against a field that does not appear overly fast on paper. Mike Luzzi will be aboard with the pair set to break from post 3.

Page McKinney (2/1) is Laurel Park veteran and has done some of his finest racing over the local oval including four stakes wins. The six year-old Mary Eppler trainee has won three consecutive races – all non-graded – most recently taking the Native Dancer while making his 2016 debut January 2 at Laurel Park. Horacio Karamanos will ride breaking from post 2.

The ever-dangerous Chad Brown will saddle 7/2 shot Majestic Affair who has recorded 6 victories in 11 starts. The four year-old won the Jazil Stakes January 16 while making his first start of 2016 and has already proven his ability to handle the Laurel surface while winning the Frank Whitely Stakes last January. Kendrick Carmouche gets the leg up from Brown; Majestic Affair will break from post 6.