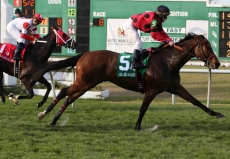 The $125,000, Grade 3 Colonel E.R. Bradley features a field of 12 veteran turf horses set to travel a mile and one sixteenth January 16 at Fair Grounds in a race that will be immediately followed by the featured Grade 3 Lecomte.

At 2/1 on the morning line, the Brad Cox-trained Chocolate Ride is the favorite following a sharp comeback win November 27 at Fair Grounds after spending nearly seven months on the sidelines. The six year-old gelding broke through with a pair of stakes victories in 2015 on the grass, winning the Grade 3 Fair Grounds Handicap and Grade 2 Mervin Muniz in succession before finishing eighth in the Grade 1 Woodford Reserve. Chocolate Ride, a winner of 5 starts from 14 career races, will make his 2016 debut with Florent Geroux in the irons breaking from post 2.

Sky Flight (9/2) finished his 2015 campaign on a high note, recording back to back wins including a last-out score in the Artie Schiller Stakes November 21 at Aqueduct. The Mark Casse trainee has 5 wins in 11 career starts for earnings of $243,940 as he looks for his first graded stakes victory after placing in two of his three previous tries. Turf ace Julien Leparoux will be aboard breaking from post 5.

String King (8/1) has been a force against Louisiana state-bred competition on the grass, but steps up to face open company again in hopes of defending his 2015 E.R. Bradley win. The Charles Smith trainee returned from a three-month break to finish second on Louisiana Champions Day December 12 in his last start.