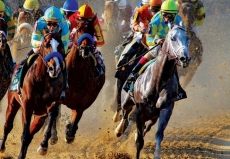 The Grade 2, $750,000 Oaklawn Handicap will serve as an appealing appetizer to the Arkansas Derby April 16, but the field of eight is main event-worthy as the cast includes some marquee names in the handicap division.

2/1 morning line favorite Effinex will make his second start in 2016 after finishing third in the Santa Anita Handicap March 12. That effort may have been better than it looked as the five year-old son of Mineshaft was making his firt start since his runner-up finish in the Grade 1 Breeders' Cup Classic. Effinex also developed a case of hives visilble on his coat prior to the race, but was permitted to run by the track veterinarian. With those troubles behind him, a better conditioned Effinex will be a handful for his seven rivals while breaking from post 8.

Melatonin (7/2) was the longshot winner of the Santa Anita Handicap and will likely be overbet based on that effort. He is listed as the co-second choice on the morning line with Upstart, who seems likely to take more betting action. Upstart was impressive winning the Grade 3 Razorback last out following a long layoff. The Rick Violette trainee looked like the Upstart of old while making a bold move around the stretch and striding out nicely to earn the win. Upstart was considered one of the frontrunners for the 2015 Derby after winning the Grade 2 Holy Bull and crossing the wire first in the Grade 2 Fountain of Youth.

Carve tries to get back on track

Carve (15/1) ran a dull third in the Razorback, but could present problems for this field if able to regain the form he demonstrated at Oaklawn in 2015. The Steve Asmussen trainee will be an appealing price, but must move forward off his most recent efforts.