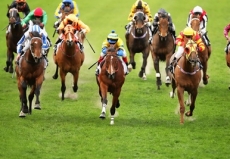 The featured event April 23 at Keeneland is the Grade 2, $250,000 Elkhorn Stakes, with a field of eight set to contest the mile and a half turf event.

5/2 morning line favorite Kaigun is in top form following his last-out victory in the Grade 2 Pan American at Gulfstream Park. The win was a breakthrough of sorts for the Mark Casse trainee who had run second in four consecutive starts - all in graded stakes races on the grass. With three triple digit Beyer Speed Figures in his last four starts, Kaigun has been a consistent performer and should find himself in the thick of things once again with regular jockey Joe Bravo in the irons. Kaigun, a six year-old gelding, has won 6 of 28 career starts for earnings of over $1.3 million.

Twilight Eclipse should be tighter

Twilight Eclipse (3/1) should improve off his most recent outing, a sixth-place finish in the Grade 2 Mac Diarmida following a four-plus month layoff, but will need to return to the form he showed last summer and fall in order to factor. The Thomas Albertrani trainee was a fixture in grade 1 turf races in 2014 and 2015, including a win in the Grade 1 Man o'War last spring. Showing some signs of age, the seven year-old has finished off the board in his last two starts, but picks up top turf pilot Julien Leparoux.

Idolo Porteno (12/1) is an interesting outsider following his third-place finish in the Grade 3 Razorback Handicap March 19. That start was the Argentenian bred's first in America and first since June 27. Idolo Porteno switches back to turf, a surface where he's won 2 of 6 career starts, and has enough early speed to make things interesting.