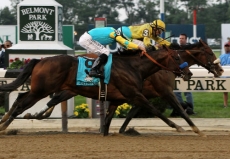 3/1 morning line favorite Wonder Gal is set to break from the outside post under jockey Rajiv Maragh after finishing third in the Grade 1 Acorn Stakes June 6 at Belmont. Prior to that effort, the Leah Gyarmati trainee ran fourth in the Grade 2 Gazelle Stakes April 4 at Aqueduct in her seasonal debut. As a 2 year-old, Wonder Gal ran third in the Breeders’ Cup Juvenile Fillies and finished second and third respectively in the Grade 1 Frizette Stakes and Grade 2 Adirondack. Her lone win came in her career debut against stakes foes in the Lynbrook.

The well-bred Chide (12/1), could be a potential upsetter for trainer Al Stall after defeating allowance company May 31 at Churchill in her last start. Chide, a daughter of 2010 Breeders’ Cup Classic winner Blame is out of an A.P. Indy mare and has two wins and one second in three career starts.