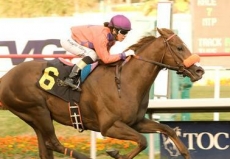 The $300,000 Grade 1 La Brea comprises a third of the graded stakes events December 26 at Santa Anita in the track’s traditional opening day racing bonanza as ten three year old fillies are set to contest the seven furlong event on the main track.

Cavorting is the 5/2 morning line favorite for trainer Kiaran McLaughlin despite a somewhat disappointing fourth-place finish as the favorite in the Breeders’ Cup Filly and Mare Sprint October 31 at Keeneland. Prior to that effort, the daughter of Bernardini won the Grade 1 Test and Prioress in succession over the summer at Saratoga while stamping herself as the premier sprinter in her age group. Cavorting has won 5 of 8 starts in her career for earnings of over $900,000. Irad Ortiz will be aboard the talented filly breaking from post 3.

Hot City Girl (3/1) is another east-coast shipper who figures to take plenty of betting action. The Linda Rice trainee enters the La Brea riding a three-race win streak that includes victories in the Grade 3 Charlestown Oaks, an allowance race at Belmont, and the Safely Kept Stakes. Hot City Girl has captured 5 of 11 career starts for earnings of $455,150.

Co-second choice at 3/1 is Ben’s Duchess from the John Sadler barn. Unlike her main rivals, the daughter of Munnings will be able to run out of her own stall. Ben’s Duchess won the Grade 3 L.A. Woman Stakes October 4 at Santa Anita and has not finished worse than the four-time winner has not finished worse than third in any of her nine career starts.