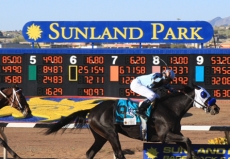 On Sunday at Sunland Park, the featured race is the $85,000 Pepsi Cola Stakes. Restricted to three-year-olds bred in New Mexico, the six furlong contest has drawn a field of eleven contenders, all of whom are geldings.

Gold Boundry has been tabbed as the morning line favorite in the wide open field at odds of 3-1 and is one of two horses in the race for trainer Todd Fincher. A dark bay son of Quinton’s Gold, he has been on the board in four of his six starts and is a two-time winner. He earned his first stakes victory last time out in the Eddy County Stakes at Zia Park and will be trying for two black type wins in a row. Elvin Gonzalez will be aboard from post position four.

Second choice at morning line odds of 4-1 is Ten Penny Cents for trainer Weston Martin. A chestnut son of Right Rigger, he has won two of his six starts and has hit the board two other times. He is trying to move forward and earn his first stakes victory and was last seen finishing second behind Gold Boundry in the Eddy County Stakes. Ry Eikleberry will be aboard and they will break from post four.

Also in the field at morning line odds of 10-1 is Asnowdream for trainer Jose Vargas. Bred and owned by Armando Arreola, Jr., the dark bay gelding is a son of Southwestern Heat will be stepping up to stakes competition for the first time. He made his career debut a winning one last time out with an eight-length maiden win at Zia Park.  Miguel Fuentes, Jr. will be aboard from post position three.