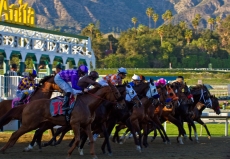 On Sunday at Santa Anita, the featured race is the $100,000 Las Flores Stakes. A Grade 3 race, the six-furlong contest has drawn a field of seven fillies and mares.

Bob Baffert will saddle Global Hottie as the 2-1 morning line favorite. A four-year-old daughter of Dixie Chatter, she will be making her first start against graded stakes company and has won four of her six career starts. She was last seen winning an optional claiming race at Santa Anita in January in her first start of the year. Victor Espinoza will be back aboard and they are scheduled to break from post position three.

Tribal Gal has been tabbed as the second choice at morning line odds of 5-2 for trainer R. Kory Owens. Bred and owned by John Pendergast, the Arizona-bred mare is a five-year-old daughter of Tribal Rule and is an eight-time career winner. A multiple stakes winner, she is trying to earn the first graded stakes victory of her career and was last seen finishing fifth in the Sunshine Millions Filly and Mare Turf Sprint Stakes. Rafael Bejarano will be aboard from the outside post.

Also in the field at morning line odds of 8-1 is Liza Doolittle Day for trainer Doug O’Neill. A four-year-old daughter of Curlin bred and owned by Arindel Farm, she will be making her stakes debut and has won two of her four career starts. She was last seen finishing eighth at Gulfstream Park against optional claiming competition and has won two of her four starts. Drayden Van Dyke will be in the irons from post position five.