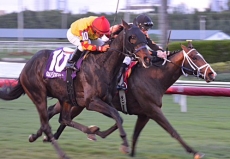 On Saturday at Gulfstream Park, the track will host the $150,000 Sunshine Millions Turf Stakes. Open exclusively to horses bred in Florida, the race will be contested at a mile and a sixteenth on the turf and has drawn a full field of twelve colts and geldings.

Fundamental has been installed as the morning line favorite at odds of 2-1 for trainer Chad Brown. A gray son of Arch, the four-year-old colt has won two of his seven starts and will be trying to break through and earn his first stakes victory. He was last seen finishing fourth in the Hollywood Derby (G1) at Del Mar and has been training steadily since then. Jockey Irad Ortiz, Jr. will be aboard and they will break from post position two.

Reporting Star looking for two wins in a row

Second choice at morning line odds of 4-1 is Reporting Star for trainer Pat Parente. A six-year-old son of Circular Quay, the dark bay gelding is a six-time winner and was second in the 2015 edition of the Sunshine Millions Turf. He is coming into this race off of a winning effort in the El Prado Stakes last time out and is scheduled to break from post position eleven under jockey Miguel Vasquez.

Also in the field at morning line odds of 6-1 is the veteran Old Time Hockey for trainer Tom Proctor. Bred and owned by Glen Hill Farm, the seven-year-old son of Smarty Jones is an eight-time winner and a former graded stakes winner. He has won his last two races, including the Millions Turf Preview Stakes, and will have regular rider Ron Allen, Jr. aboard from post position eight.