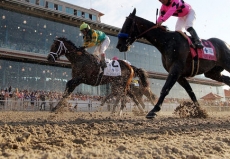 A lightly-raced and deep renewal of the Louisiana Champions Day Lassie shapes up to be one of the more intriguing races of the day December 12 at Fair Grounds as 13 juvenile fillies are set to contest the six furlong event on the main track.

Cajun Conoseir (7/2) is the lukewarm morning line favorite after winning her first three starts, including back to back stakes events. The Steve Flint trainee has raced on or near the lead in each of her three wins, but will be making her first start since winning the August 8 Louisiana Juvenile. Notably, Flint connects at a 25% clip from 53 starters returning from layoffs of 61-180 days. The daughter of Closing Argument will break from post 3 under regular pilot Gerard Melancon.

Conquest Tiz One (5/1) is still a maiden, but posted speed figures of 68 and 70 in her first two starts – both faster than any of Cajun Conoseir’s races. The Michael Stidham-trained filly was beaten just three parts of a length in her debut at Woodbine and followed that effort with another runner-up finish October 4 at Keeneland while finishing a length clear of the third-place horse. Breaking just to the outside of the favorite, Conquest Tiz One seems likely to inherit the lead or run close to the early fractions.

Flying Tinkerbell (15/1) warrants plenty of consideration for the exotics as the fast-closing filly gets an additional half furlong to work with following her late charge November 20 at Fair Grounds while finishing second. Flying Tinkerbell is winless in four starts.