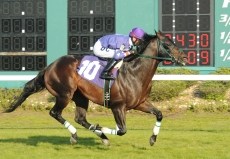 On Saturday at Gulfstream Park, the featured race is the $75,000 Silks Run Stakes. Carded at five-furlongs on the turf, the race has drawn a full field of eight colts and geldings with one additional listed as also-eligible.

Bold Thunder, the winner of the 2014 Silks Run Stakes, has been tabbed as the morning line favorite at odds of 3-1 for trainer Patricia Farro. A five-year-old son of Bold ‘n Flashy, he has won six of his nineteen career starts and is a multiple stakes winner. He was last seen finishing third in the Gulfstream Park Turf Sprint Stakes as the favorite following a win in the Turf Dash Stakes at Tampa. Paco Lopez will be in the irons from post position two.

Amelia's Wild Ride going for back to back stakes wins

Second choice at 7-2 on the morning line is Amelia’s Wild Ride for trainer Ramon Preciado. A four-year-old son of D’Wildcat, the bay earned his seventh career victory and first stakes win last time out in the Gulfstream Park Turf Sprint. He closed out last season with five wins from fourteen outings. He will be making his second start of the year and is scheduled to break from post position six under jockey Joel Rosario.

Yes I'm Lucky back to the races off of a layoff

Also in the field at morning line odds of 12-1 is longshot Yes I’m Lucky for trainer Eddie Plesa, Jr. A four-year-old colt by Yes It’s True, he is returning to action off of an eleven-month layoff after winning the Mr. Light Stakes last April. That was his only start of 2014 and he did have a productive juvenile season in 2013 with four victories, three of which came against stakes company. Juan Leyva will be aboard and they will break from the rail.