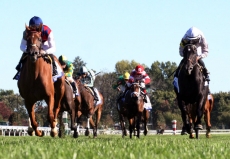 On Thursday, the featured race on Santa Anita’s New Year’s Day card is the 18th edition of the $75,000 Blue North Stakes. Scheduled to be run at one mile on the turf, the race has drawn a full field of ten newly-turned three-year-old fillies with four additional listed as also-eligible.

Rainha Da Bateria headlines the field as the morning line favorite at 5-2 for trainer Graham Motion. Purchased for $425,000 as a yearling, the chestnut daughter of Broken Vow won two of her five starts as a juvenile including the Jessamine (G3). She was second, beaten a neck, last time out in the Jimmy Durante (G3) as the favorite. Mike Smith will remain aboard and they are scheduled to break from post position eight.

Second choice at 4-1 on the morning line is Jaded Glory for trainer Tom Proctor. A bay daughter of Smart Strike, she broke her maiden at first asking in her career debut at Santa Anita. She was fourth in her first try against stakes competition, the Jimmy Durante (G3) last time out after a rough trip. She has been training steadily since that last race and will have Gary Stevens, aboard last time out, in the irons again from post position five.

Doug O'Neill back in action with Sharla Rae

Also in the field at morning line odds of 6-1 is Sharla Rae who will be again racing under trainer Doug O’Neil’s name after being transferred to his longtime assistance Leandro Mora while O’Neill was sitting out a suspension. A bay daughter of Afleet Alex, she will be trying the turf for the first time and has won on both conventional dirt and synthetics. Elvis Trujillo will be aboard and they will break from post position seven.