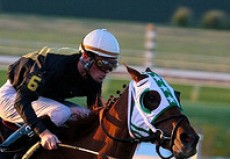 The $250,000 Sleepy Hollow Stakes for two year-old fillies is the first of eight stakes races for New York-bred horses Saturday, October 18 at Belmont Park with seven runners lined up to contest the one mile event on the main track.

Ostrolenka is the 9/5 morning line favorite for trainer Todd Pletcher after posting a monster 14-length victory against state-bred maiden special weight foes at Belmont in September.  That effort, which was at the same distance as the Sleepy Hollow, earned a Beyer Speed Figure of 90 – 9 points better than any figure earned by the rest of the field.   Ostrolenka appears to be the controlling speed, but must avoid a potential duel with Breakin the Fever (12/1 ML) who has shown excellent speed in her last two starts.  If Ostrolenka is tractable enough to sit behind the early speed for jockey John Velazquez, the others will be running for second behind the short-priced favorite.

5/1 shot Market Conduct is an interesting horse after breaking her maiden at Saratoga in her debut.  In that race, she sat comfortably off the pace and defeated a next-out winner by two and a half lengths.  In her last start, the daughter of 2010 Kentucky Derby winner Super Saver caught a muddy track at Belmont in a $150,000 stakes race and could do no better than third.

Other Pletcher entry cannot be dismissed

In addition to Ostrolenka, Pletcher will saddle 7/2 shot Bullheaded Boy who adds blinkers after finishing third and second in a pair of minor stakes races.  Pletcher hits at 21% with runners adding blinkers for the first time.