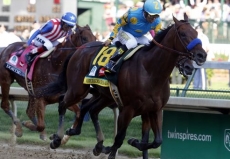 In winning the Preakness Stakes in an easy gallop May 16 at Pimlico, American Pharoah became the 14th horse since 1978 to win the first two legs of the Triple Crown. Of course, all 13 of his predecessors in that span failed to accomplish the elusive feat.

As even most casual horse racing fans are aware, no runner has won the Triple Crown since Affirmed in 1978. If American Pharoah is to do what outstanding horses such as Spectacular Bid, Sunday Silence, Big Brown, California Chrome – and a host of others – could not, he will have certainly earned it the hard way. The 147th running of the Belmont Stakes is sure to feature a gauntlet of talented, well-rested rivals waiting for The Kentucky Derby and Preakness champ June 6 in New York.

As American Pharoah crossed the wire seven lengths ahead of his closest Preakness rival while withstanding a driving rainstorm and a muddy track, Materiality and Frosted spent the afternoon resting comfortably and enjoying the shelter of their stalls at Belmont Park. The two colts figure to be the leading candidates to upset American Pharoah’s bid to break the Triple Crown draught, each possessing the speed, class, pedigree, and connections to make them legitimate threats.

Materiality was strongly considered for the Preakness by trainer Todd Pletcher after a troubled Kentucky Derby start that led to a sixth-place finish - the colt’s only defeat. Pletcher opted to wait for the Belmont citing the extra rest as a benefit as well as the colt’s affinity for the Belmont dirt. Also of note is the fact that Materiality is a son of 2005 Belmont winner Afleet Alex. Pletcher has won the race twice with Rags to Riches in 2007 and Palace Malice in 2013. Frosted, trained by Kiaran McLaughlin, appears to be a rapidly improving colt after winning the Grade 1 Wood Memorial and running fourth in the Kentucky Derby in his last two starts. Like 2014 spoiler Tonalist, Frosted is a son of Tapit. McLaughlin won the Belmont in 2006 with Jazil. As Big Brown proved in 2008, the Belmont can be a daunting challenge for a Derby/Preakness winner even when the field is lackluster. With two bona fide contenders lying in wait for American Pharoah, breaking the Triple Crown jinx will be a monumental challenge.