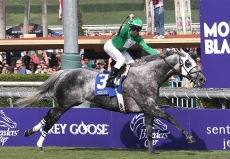 On Monday at Santa Anita, the featured race is the $100,000 California Flag Stakes.  Scheduled to be run at six and a half furlongs on the turf, the race has drawn a field of seven California-bred colts and geldings.

Forest Chatter has been tabbed as the morning line favorite at odds of 8-5 for trainer Richard Mandella. A four-year-old gelded son of Dixie Chatter, he has been on the board in six of his nine starts and has four career victories. He is trying to rebound after finishing sixth in the Green Flash Handicap at Del Mar in August and has been training forwardly since that race with three consecutive bullet workouts. Mike Smith will be aboard and they will break from post position six.

Second choice at morning line odds of 9-5 is Ambitious Brew for trainer Martin Jones. A homebred for owner Pamela Ziebarth, the five-year-old gelded son of Tizbud has won five of his fourteen starts and is a multiple minor stakes winner. He was last seen winning the E.B. Johnston Stakes at Los Alamitos which was his first victory of the year. Gary Stevens will be in the irons and they will break from the inside post.

Rock Me Baby trying to rebound after last race

Also in the field at morning line odds of 3-1 is Rock Me Baby for trainer Craig Dollase. A six-year-old son of Rock Hard Ten, he was purchased for $210,000 as a juvenile by West Point Thoroughbreds and is a seven-time winner. Two of those victories came against stakes competition and he is trying to rebound and return to form after finishing sixth last time out. Edwin Maldonado will be aboard from post two.