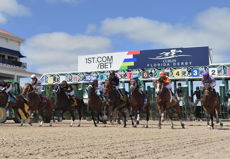 Saturday, March 27 features the $1 million Florida Derby (G1) at Gulfstream Park. The race features the return of dominant Holy Bull (G2) and Fountain of Youth (G3) winner Greatest Honour. But, with a big field of 11 horses set to compete in a perennially live Kentucky Derby prep, the Florida Derby is one of the most anticipated horse races of the year!

Here are the odds on the major Florida Derby contenders from the best online racebooks.

Before you bet the Florida Derby, it is a good time to get to know the key contenders.

Greatest Honour has starred in the Florida Derby prep races. Trained by Shug McGaughey, he went straight from a maiden race to the Holy Bull. Well behind the leaders early, he blew past in the lane like his foes were standing still. He impressed again in the Fountain of Youth, picking up steam late to catch talented pacesetter Drain the Clock to win by a length and a half.

Known Agenda was well beaten in both the Remsen (G2) and the Sam F. Davis (G3), and dropped to allowance company for a confidence builder. He added blinkers for that race February 26 at Gulfstream and ran the field off their feet, winning by eleven lengths. Irad Ortiz, Jr. rode then and returns for the Florida Derby.

Bob Baffert is always imposing when he ships a horse for a Derby prep. He trains Spielberg, who comes to Florida after a second-place finish behind champion Essential Quality in the Southwest Stakes (G3) at Oaklawn. A pace-versatile horse, he hopes to improve after a tough start and a wide trip that day.

Collaborate broke his maiden by twelve lengths on the Fountain of Youth undercard February 17. The son of Into Mischief won on the front end that day, though passed enough horses on his sprint debut February 6 to suggest he may not be one-way speed. Though, the Saffie Joseph, Jr. trainee will not have it easy, since this will be his first two-turn race and his first race against winners.

Especially if you are planning to bet exotic wagers like the exacta, trifecta, and superfecta, it makes sense to think about the other Florida Derby contenders as well so you can pick a longshot to include.

Quantum Leap faces winners for the first time. He broke his maiden over the same mile and an eighth trip as the Florida Derby, and the Ian Wilkes trainee showed enough grit and stamina to win by a neck despite a protracted duel with the odds-on favorite.

Soup and Sandwich, trained by Mark Casse, has never faced winners before but he has shown enough talent to give him a shot in the Florida Derby. He has tactical speed, he won both of his races easily, and his jockey John Velazquez has won the Florida Derby five times already.

Nova Rags chased on for second in the Sam F. Davis, and his trainer Bill Mott has a good reputation for developing horses as they continue through their three-year-old season. He is bred well on both sides for the stretch out to a mile and an eighth.

When doing your Florida Derby handicapping, since this is an eleven-horse field, it pays to be wary of horses breaking from outside posts, especially at a short price. With a short run into the first turn, horses in gates 8 or wider often struggle, since they have to either work early to get a good position or race wide around the first turn.

If you are betting the Florida Derby online, it pays to find the best online racebook that will give you the features you need and the odds and bonuses you want. Before choosing where to place your Florida Derby bets, make sure to read our trusted reviews of online racebooks. They will help you choose the best place to play!

Greatest Honour has done a lot to merit being the favorite, and his trainer Shug McGaughey has won the Florida Derby before with eventual Kentucky Derby winner Orb. However, Known Agenda has stamina and is getting good at the right time, and should provide good value in the win pool. Longshot Quantum Leap has tactical speed and proven mile and eighth stamina, and Soup and Sandwich has a perennially live jockey.