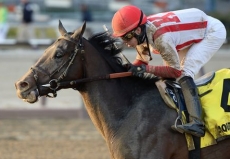 On Saturday at Aqueduct, the featured race is the $250,000 Withers Stakes. Restricted to three-year-olds and an early prep for the Kentucky Derby (G1), the Grade 3 event will be contested at a mile and a sixteenth and has drawn a field of seven colts and geldings.

Flexibility tops the field as the heavy favorite at odds of 7-5 on the morning line for trainer Chad Brown. A bay son of Bluegrass Cat, he was purchased for $185,000 as a juvenile and has two wins and two seconds from four starts. He earned his first stakes victory last time out in the Jerome Stakes (G3) at Aqueduct. Irad Ortiz, Jr. will be in the irons and they are scheduled to break from post position two.

Second choice at morning line odds of 5-2 is Sunny Ridge for trainer Jason Servis. A gray son of Holy Bull bred and owned by Dennis Drazin in New Jersey, he has two wins from five starts and will be trying to earn his first graded stakes victory. He was last seen finishing second in the Delta Jackpot Stakes (G3) in November and has been training well since that race. Manuel Franco will be aboard from the outside post.

Also in the field at morning line odds of 15-1 is longshot Donegal Moon for trainer Todd Pletcher. Purchased for $220,000 as a yearling by Donegal Racing, the chestnut son of Malibu Moon has been on the board in three of his six starts and is trying for his second win. He lost his jockey with a bad stumble at the start of the Jerome Stakes (G3) last time out and will get a change to Aaron Gryder. They will break from the rail.