Firing Line Shooting For a Big One in $800,000 Sunland Derby 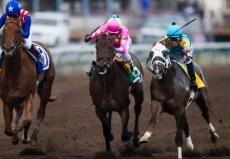 On Sunday at Sunland Park, the track will host the 13th edition of the $800,000 Sunland Derby. Carded at a mile and an eighth, the Grade 3 race offers points towards a berth in the Kentucky Derby (G1) and has drawn a field of eight colts and geldings.

Firing Line has been tabbed as the morning line favorite at odds of 8-5 for trainer Simon Callaghan. A bay son of Line of David purchased for $240,000 as a juvenile, he has been second to the undefeated Dortmund in both starts against graded stakes company since breaking his maiden in his second start. He is trying for the first stakes win of his career and will have veteran rider Gary Stevens aboard from the inside post.

Second choice at 3-1 on the morning line is Lord Nelson for trainer Bob Baffert who has saddled the past two winners of the Sunland Derby. Purchased for $340,000 as a yearling, the chestnut son of Pulpit has won three of his six starts included the San Vicente (G2) in February. He was last seen finishing fourth in the San Felipe (G2). Martin Garcia will be back in the irons from post position two.

Also in the field at morning line odds of 5-1 is Tiznow R J for trainer Steve Asmussen. A bay son of Tiznow, he has one win from five starts and is trying to rebound after finishing seventh in the Risen Star (G2) at Fair Grounds in February. He has had a steady worktab since that performance. Regular rider Robby Albarado will remain aboard and they will break from post position six.