Firing Line's Derby Even Better Than it Looked 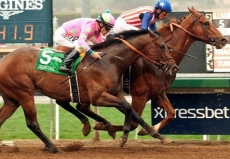 As good as Firing Line’s Kentucky Derby performance appeared on the surface, a closer look my reveal his second place finish to American Pharoah to be even better depending – of course – on how you look at it.

Firing Line, trained by Simon Callaghan and ridden by Gary Stevens, has done little wrong in his career and finally turned the tables on his chief rival, Dortmund, in the Kentucky Derby after two previous stakes defeats by a head. The son of Line of David also made American Pharoah run every step of the mile and a quarter distance leaving the winner noticeably gassed after he crossed the wire. This was a distinct departure from American Pharoah’s brilliant win in the Arkansas Derby where the colt won by open lengths.

While the final margin suggests American Pharoah was clearly better than Firing Line on the first Saturday in May, the way the two horses ran is more than an interesting side note. With Dortmund laboring in the stretch, it appeared that Firing Line was still traveling easily in second with American Pharoah wide in third and being asked for more run by jockey Victor Espinoza. With around 300 yards left to run, Firing Line held a slim lead over American Pharoah and appeared to be moving equally as comfortably. Then Firing Line continued running on his right lead, no doubt costing him additional acceleration in the final stages of the race.

The failure to change leads cannot be overstated. If the lightly-raced Firing Line gained an education – or at least made Hall of Famer Stevens more aware of his tendencies, a correction of the habit in the Preakness would put the Derby runner-up right on the wire with American Pharoah.