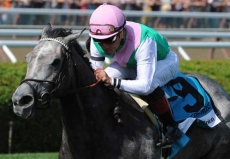 On Saturday at Keeneland, the track will host the 27th running of the $300,000 Jenny Wiley Stakes. A Grade 1 race carded to be run at a mile and a sixteenth on the turf, the race has drawn a field of eight fillies and mares.

Filimbi has been tabbed as the morning line favorite at odds of 8-5 for trainer Bill Mott. Bred and owned by Juddmonte Farms, the five-year-old daughter of Mizzen Mast is out of multiple Grade 1 winner Flute. Winner of six of her fourteen starts, Filimbi is trying to rebound after finishing fifth in the Hillsborough Stakes (G3) at Gulfstream in her first start of the year. Regular rider Joel Rosario will remain aboard and they will break from post position three.

Chad Brown will saddle Ball Dancing as the second choice at odds of 2-1 on the morning line. A four-year-old daughter of Exchange Rate, she began her career and France before making her stateside debut a winning one in the Sands Point (G2) at Belmont Park in September. She was second last time out in the Hillsborough Stakes (G3) and will be making her second start of the year. Javier Castellano will be aboard for the first time and they will break from post four.

Hard Not to Like trying to defend Jenny Wiley title

Also in the field at morning line odds of 5-1 is Hard Not to Like for trainer Christophe Clement. A six-year-old daughter of Hard Spun, she has won six of her seventeen starts and won the 2014 edition of the Jenny Wiley (G1). Though she finished first in her first start of the year in the Endeavor Stakes (G3), she was disqualified and placed second after coming out in the stretch. Irad Ortiz, Jr. will be in the irons from post position five.