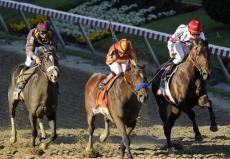 The future stars of horse racing and potential players on the 2015 Triple Crown trail will be the highlight of Sunday’s card at Del Mar in the 44th edition of the $200,000 Best Pal Stakes. The Grade 2 event will be run at six and a half furlongs for the final time on synthetics.

The 5-2 morning line favorite in the field of eight juveniles is Story to Tell, a bay son of Bluegrass Cat trained by Dan Hendricks. Joe Talamo will remain aboard after piloting the $200,000 purchase in all three starts to date and the pair will break from the rail. He has won two of his three starts including the W.L. Proctor Memorial Stakes last time out. He will be making his first start on synthetics are racing exclusively on conventional dirt.

Doug O’Neill will send out Bad Read Sanchez, installed at 3-1 on the morning line for Reddam Racing, LLC. The juvenile son of Warrior’s Reward will have Mario Gutierrez aboard and will try to avenge a runner-up effort to Story to Tell last time out. In his debut, he broke his maiden by ten lengths. A $130,000 yearling purchase, the bay colt races for the same connections that won the Kentucky Derby in 2012 with I’ll Have Another.

Mark Casse has a loaded pair of promising colts

Mark Casse will saddle two runners in the field, Conquest Bigluck E and Skyway, both at 5-1 odds. Conquest Bigluck E is from the highly regarded first foal crop of champion Lookin at Lucky and will have Mike Smith in the irons following a maiden win in his debut at Churchill Downs in June. Skyway, a son of Sky Mesa, will have regular rider Stewart Elliot aboard for his third start and broke his maiden on synthetics at Keeneland in April.