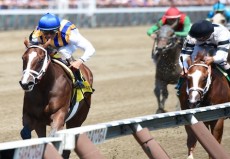 Some of the most promising juvenile fillies in the country will square off in the $400,000 Darley Alcibiades Stakes at Keeneland on Friday as a key prep for the Breeders’ Cup Juvenile Fillies. The Grade 1 event will be run at a mile and a sixteenth over the newly-installed dirt main track and has drawn a field of thirteen.

Fashion Alert, undefeated from two starts for trainer Todd Pletcher, has been installed as the morning line favorite at odds of 4-1. Purchased for $125,000 as a yearling, the bay daughter of Rockport Harbor made her winning career debut against stakes company in the Astoria and followed that up with a victory in the Schuylerville (G3). She will have regular rider John Velazquez aboard and is scheduled to break from the inside post.

Second choice at morning line odds of 9-2 is Top Decile for trainer Albert Stall, Jr. The chestnut filly, a daughter of Congrats, made her career debut a winning one under Rosie Napravnik at Saratoga in August. Napravnik has retained the mount and the pair will break from post nine. Top Decile will be making her stakes debut and stretching out to two-turns for the first time after sprinting in her first race.

Also in the field and breaking from the outside post is Gap Year, tabbed at 8-1 on the morning line. Trained by Kieran McLaughlin, the bay daughter of Bernardini will have Joel Rosario back aboard after the pair finished third, beaten only a head, in her debut at Saratoga in August. Since that race, she has had a bullet workout at Saratoga in preparation for her stakes debut for Godolphin Racing, LLC.