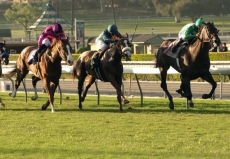 On Sunday at Santa Anita, the featured race is the $75,000 Wishing Well Stakes. Scheduled to be run at about six and a half furlongs on the turf, the race has drawn a field of nine fillies and mares.

Fanticola has been tabbed as the morning line favorite at odds of 5-2 for trainer Phil D’Amato. A five-year-old daughter of Silent Name (JPN), she has been on the board in twelve of her thirteen career starts and has four wins to her credit.  She was third in the 2014 edition of the Wishing Well Stakes and was last seen winning the Megahertz Stakes at Santa Anita. Martin Garcia will be aboard from post position five.

Second choice at 7-2 on the morning line is Sky Treasure for trainer Mark Casse. A five-year-old daughter of Sky Mesa, she has won three of her twelve career starts and will be trying to earn the first stakes win of her career. She was last seen finishing fourth in the Monrovia Stakes (G2) at Santa Anita in January in her first start of the year. Corey Nakatani has retained the mount and they will break from post position three.

Bob Baffert will saddle Global Hottie at morning line odds of 9-2 as she tries to earn the first black type victory of her career. A lightly-raced, four-year-old daughter of Dixie Chatter, she has won four of her six career starts and will be trying the turf for the first time. She was last seen winning an optional claiming race on the main track at Santa Anita. Victor Espinoza will be in the irons and they will break from post position six.