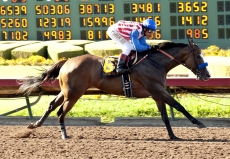 On Sunday at Santa Anita, the featured race is the $100,000 Las Flores Stakes. Restricted to fillies and mares, the six-furlong race has Grade 3 status and has drawn a field of seven.

Fantastic Style tops the field as the morning line favorite at odds of 8-5 for trainer Bob Baffert. A bay daughter of Harlan’s Holiday, she was purchased for $525,000 as a two-year-old and has won four of her six starts. She has been on the sidelines since winning the Great Lady M Stakes (G2) at Los Alamitos in July and has had a recent bullet workout in preparation for her return to the races. Rafael Bejarano will be aboard and they will break from post position three.

Sensitively making second start off of a layoff

Second choice at morning line odds of 5-2 is Sensitively for trainer Philip D’Amato. A four-year-old daughter of Street Sense, she has won two of her five starts and will be trying to earn her first black type victory. She returned off of a five-month layoff last time out to win an optional claiming race and will be stepping back up in class. Tyler Baze will be aboard and they will break from post position two.

Also in the field at morning line odds of 3-1 is Ben’s Duchess for trainer John Sadler. A four-year-old daughter of Munnings, she has been on the board in nine of her eleven starts and is a four-time winner. She was a graded stakes winner as a three-year-old and will be trying to rebound after finishing ninth in the Santa Monica Stakes (G2). Abel Lezcano will be aboard and they will break from post position four.