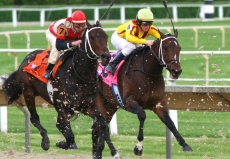 The 2015 Triple Crown trail is over, but there’s still plenty of high-dollar three year-old stakes action attracting major runners from around the country.

On June 20, the$500,000 Ohio Derby has attracted an interesting field of nine with several familiar names from the Kentucky Derby and Preakness Stakes. Whiskey Ticket, the 3/1 morning line favorite did not compete in any Triple Crown events, but was impressive winning the Grade 3 Illinois Derby April 18 at Hawthorne in just his second career start. Trained by Bob Baffert, Whiskey Ticket broke his maiden March 19 at Santa Anita before shipping to Illinois and handling several new challenges with aplomb. Shipping for the first time, stretching out to a route race, tackling a field of winners, and demonstrating the ability to win from off the pace, Whiskey Ticket proved to be the genuine article and will once again be a tough customer in the Ohio Derby.

Divining Rod (7/2), winner of the Grade 3 Coolmore Stakes at Keeneland April 11, came back to run a credible third over a sloppy track in the Grade 1 Preakness Stakes behind American Pharoah. With two wins in six lifetime starts, the Arnaud Delacour trainee is improving and should be a major factor.

Other Ohio Derby notables include Far Right (9/2), Mr.Z (6/1), and War Story (6/1). All three colts ran in the Kentucky Derby, with Mr. Z also competing in the Preakness. Far Right won the Grade 3 Southwest Stakes in February for trainer Ron Moquett.