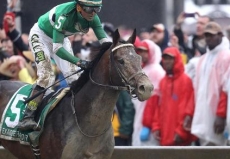 Nyquist couldn't bring home the second jewel of the Triple Crown, but the 2016 Preakness lived up to its hype and expectations as Exaggerator finally turned the table on his primary rival.

Despite losing to the previously unbeaten Nyquist (3/5) in all four of their previous matchups, Exaggerator (5/2) rolled past the favorite in the stretch and benefitted from a sloppy racing surface and fast early pace. Despite benefitting from those factors, Exaggerator was clearly the best horse and never looked like anything but a winner once he reached contention around the far turn under regular rider Kent Desormeaux. Exaggerator, second in the Kentucky Derby to Nyquist two weeks prior, once again demonstrated a powerful late kick to pull away from the field. The victory made the son of Curlin 3 for 3 over tracks rated sloppy or muddy to go with major wins in the Delta Jackpot and Santa Anita Derby.

Nyquist game as ever

Nyquist lost little in defeat while being dogged by the speedy Uncle Lino through very quick quarter and half mile fractions. The champ was able to put away his pace rival, but was clearly in trouble at the head of the stretch. Still, the Doug O'Neill trainee dug in and made a race of it, forcing Exaggertor to produce his best run at the eighth pole. Nyquist appeared to hold on for second, but was very narrowly beaten for the place by the late-closing 16/1 shot Cherry Wine.

No Nyquist, but top two on to Belmont

The top three finishers were expected to rematch in the June 11 Belmont Stakes, but Nyquist's connections announced May 24 that their colt would bypass the race due to a fever.