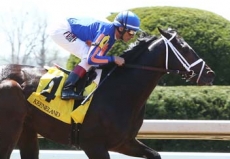 The field is set for the third jewel of the Triple Crown, the $1.5 million Belmont Stakes.  The mile and a half contest has drawn a field of thirteen three-year-old colts and geldings to compete in the prestigious Grade 1.

Exaggerator has been tabbed as the morning line favorite at odds of 9-5 for trainer Keith Desormeaux. A dark bay son of Curlin, the runner-up in the 2007 Belmont Stakes (G1), he won the Preakness Stakes (G1) after finishing second in the Kentucky Derby (G1) behind champion Nyquist. Though a rematch between those two colts will have to wait for another day, Exaggerator will break from post eleven under Kent Desormeaux who has recently completed a stint in rehab.

Stradivari trying for a breakthrough victory

Second choice at morning line odds of 5-1 is Stradivari, one of two horses in the race for trainer Todd Pletcher. A dark bay son of Medaglia d’Oro, he will be trying to earn the first graded stakes victory of his career. The lightly-raced colt made his stakes debut in the Preakness Stakes (G1) and finished fourth over a sloppy track after back to back victories. John Velazquez will be in the irons and they will break from post position five.

Also in the field at morning line odds of 12-1 is Governor Malibu for trainer Christophe Clement who saddled Tonalist to win the Belmont Stakes (G1) in 2014. A chestnut son of Malibu Moon bred in New York, he has been on the board in all seven starts and was last seen finishing second in the Peter Pan Stakes (G2). Since that race, he has been training forwardly at Belmont Park and will have Joel Rosario aboard from the inside post.