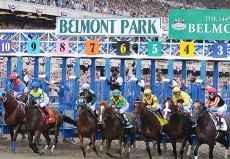 On Saturday at Belmont Park, long-distance runners will be featured in the inaugural running of the $200,000 Temperance Hill Invitational. The race will be contested at a mile and five-eighths over the main track and has drawn a field of six.

Topping the field at 2-1 on the morning line is the Argentinean-bred Ever Rider. Though his stateside debut in the Breeders’ Cup Marathon last year was a disappointing performance, he has been on the board in five of his eight starts this year. He was last seen finishing second to Cary Street who he faces again in the Greenwood Cup (G3) at Parx. Javier Castellano will be aboard for Marya Montoya and they will break from post five.

Second choice at morning line odds of 5-2 is Cary Street for trainer Brendan Walsh. The five-year-old gelded son of Smarty Jones has ascended the ranks this year after competing for a modest $10,000 claiming tag last year. His victory last time out was the fifth of his career and his first stakes victory from seventeen starts. Jose Lezcano will be aboard for the first time and they will break from the rail.

Also in the field is Village Warrior at morning line odds of 5-1 for trainer Todd Pletcher. Purchased for $200,000 as a yearling, the three-year-old son of Majestic Warrior is taking on stakes company for the first time after winning his last two starts. He prevailed by a neck against allowance company at Saratoga in his most recent start to earn his fourth career victory. Irad Ortiz, Jr. will be in the irons and the pair will break from the outside.