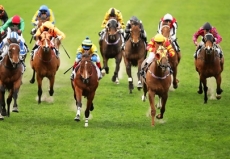 With 11 two year-old fillies set to contest the $200,000 Miss Grillo Stakes at a mile and one sixteenth on the grass, the race shapes up to be one of the more interesting and contentious betting races September 27 at Belmont Park.

Despite being winless in three starts and making her United States debut, Llanita is the 5/2 morning line favorite after a pair of second-place finishes at Deauville in France. Bred in Great Britain, Llanita will also be making her first start for trainer Chad Brown who excels with newly acquired runners. Llanita will break from post 3 under jockey Irad Ortiz and will receive Lasix for the first time.

Another filly bred in Great Britain, Belvoir Bay, is the second choice on the morning line at 3/1. However, unlike Llanita, Belvoir Bay has won 2 of 5 career starts – both in England – and will stay in the care of her European conditioner Richard Hannon. The daughter of Equiano who finished fourth in her last start August 29 in minor stakes race at Goodwood, will be ridden by Jose Lezcano will breaking from post 6. She will race without Lasix.

The ever-dangerous jockey/trainer combination of John Velazquez and Todd Pletcher will be represented by 5/1 shot Thrilled who will break from post 7. Thrilled, a daughter of 2011 Breeders’ Cup Juvenile winner Uncle Mo, broke her maiden at first-asking August 9 at Saratoga before returning with a fine second-place effort in the P.G. Johnson Stakes September 3.