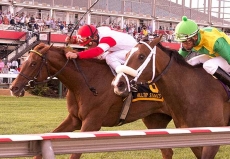 On Sunday at Golden Gate Fields, the featured race is the $50,000 Miss America Stakes. Carded at a mile and a sixteenth on the turf, the race has drawn a field of twelve fillies and mares.

Emotional Kitten headlines the field as the heavy favorite at odds of 8-5 on the morning line for trainer Wesley Ward. Bred and owned by Ken and Sarah Ramsey, the five-year-old mare is a five time winner and was a graded stakes winner as a three-year-old. She has gone winless from six starts this year but has been on the board four times. She was third in an allowance race at Keeneland last time out and will break from post position four under Ricardo Gonzalez.

Second choice at morning line odds of 5-1 is Journey On for trainer Richard Baltas. A California-bred daughter of Good Journey, the five-year-old mare has won four of her seventeen starts and is trying to earn her first stakes victory. She has hit the board twice from four starts this year and was second last time out in an optional claiming race at Del Mar. James Graham will be aboard and they will break from post position nine.

Also in the field at morning line odds of 12-1 is Circling (IRE) for trainer Neil Drysdale. A four-year-old daughter of Galileo (IRE), she has been on the board in half of her fourteen starts and is trying to earn her second career victory and first black-type score. She will need to make a step forward after two poor performances and was seventh last time out in an optional claiming race. Kyle Frey will be in the irons and they will break from post seven.