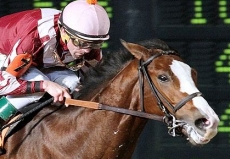 On Saturday at Delta Downs, the stakes action will continue with the $250,000 Delta Mile. Carded at one mile, the race has drawn a competitive field of eight colts and geldings.

Departing has been tabbed as the morning line favorite at odds of 8-5 for trainer Albert Stall, Jr. A homebred for Claiborne Farm and Adele Dilschneider, the five-year-old son of War Front has won eight of his twenty starts and is a multiple graded stakes winner. He has one win from five outings so far this year and that came in the Firecracker Stakes (G2) at Churchill Downs. Colby Hernandez will be aboard and they will break from the inside post.

Second choice at morning line odds of 3-1 is Cougar Ridge for trainer Randy Morse. A gelded son of Johannesburg, the five-year-old is a ten time winner and is coming into this race off of three consecutive victories. He won an allowance race at Keeneland last time out as the favorite. Robby Albarado will be in the irons and they are scheduled to break from post position seven as he goes for his fourth straight victory.

Also in the field at morning line odds of 4-1 is Rise Up for trainer Tom Amoss. A four-year-old son of Rockport Harbor, he is a seven-time career winner and won the Delta Jackpot Stakes (G3) as a juvenile. Since then, his form has tailed off and he has one win, a victory against optional claiming company, from eight starts this year. He was fourth last time out and will try to move forward with Gerard Melancon aboard from post five.