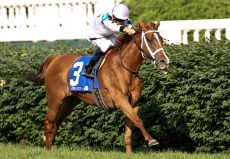 On Friday at Santa Anita, the featured race is the $75,000 Arboretum II Stakes. Restricted to fillies and mares, the stakes race will be contested at about six and a half furlongs over the downhill turf course and has drawn a field of nine.

Dreamologist headlines the field as the morning line favorite at odds of 8-5 for trainer Richard Mandella. A four-year-old daughter of Tapit, she is out of the Eclipse Award champion and 2006 Breeders’ Cup Juvenile Fillies (G1) winner Dreaming of Anna and has been on the board in five of her six starts. She will be trying to earn her fourth victory and first black type win and is stepping back up to stakes company after two consecutive allowance wins. Flavien Prat will be in the irons and they will break from post position seven.

Second choice at morning line odds of 3-1 is Miss Double d’Oro, one of two fillies in the race for trainer Neil Drysdale. A four-year-old daughter of Medaglia d’Oro, she has won two of her nine starts and was a stakes winner as a three-year-old. She is winless from two starts this year and will be trying to move forward after a fourth-place finish in an allowance race last time out. Santiago Gonzalez will be aboard and they will break from post position five.

Also in the field at morning line odds of 4-1 is Tesalina (CHI) for trainer Wesley Ward. A five-year-old daughter of Fusaichi Pegasus, the dark bay mare has four wins from ten starts and will be trying to notch her first stakes victory. She has had two runner-up efforts against stakes company in her recent starts and was last seen in the Windley Key Stakes at Gulfstream Park. Kent Desormeaux will be aboard and they will break from post position eight.