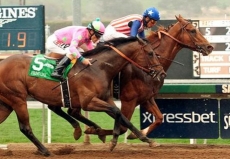 On Saturday at Santa Anita, the stakes action kicks off with a key prep race for the Kentucky Derby, the $400,000 San Felipe Stakes. The Grade 2 race, scheduled to be run at a mile and a sixteenth, has drawn a field of ten colts and geldings.

The undefeated Dortmund tops the field as the morning line favorite at odds of 8-5 for trainer Bob Baffert. A perfect four-for-four, the chestnut son of Big Brown has won by a head over Firing Line in his most recent two starts, both of which came against graded stakes competition. He has been training steadily since his last race and will break from post position four under regular jockey Martin Garcia as he goes for his fifth straight win.

Second choice at 4-1 on the morning line is another undefeated colt, Ocho Ocho Ocho. Trained by James Cassidy, the dark bay son of Street Sense was purchased for $200,000 as a juvenile and has won all three career starts to date. After a narrow score in the Delta Jackpot (G3) in November, he has been on the bench preparing for his sophomore debut and has had two consecutive bullet workouts. Mike Smith will be back aboard from post position two.

Bolo making three-year-old debut and getting a surface switch

Also in the field at morning line odds of 6-1 is Bolo for trainer Carla Gaines. A dark bay son of Temple City, he will be making a change and trying conventional dirt for the first time after racing on the grass in all three starts. He comes into this race off of back-to-back wins including a score in the Eddie Logan Stakes in December. Victor Espinoza will be in the irons for the first time and they will break from post position seven.