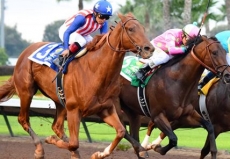 On Saturday at Santa Anita, the featured race is the $1 million Santa Anita Derby. Scheduled to be run at a mile and an eighth, the Grade 1 contest has drawn a field of six colts and geldings trying to earn a spot in the starting gate for the Kentucky Derby (G1).

Dortmund headlines the field as the morning line favorite at odds of 3-5 for trainer Bob Baffert. Undefeated from five starts, the chestnut son of Kentucky Derby winner Big Brown was last seen winning the San Felipe (G2) in a front-running score over a field of nine rivals. Purchased for $140,000 as a juvenile, he has been favored in all five starts. Regular rider Martin Garcia will be in the irons and they are scheduled to break from the inside post.

Second choice at 7-2 on the morning line is Prospect Park for trainer Clifford Sise, Jr. A dark bay son of Tapit bred and owned by Pam and Martin Wygod, he has been on the board in five of his six starts and will be trying to earn the first stakes victory of his career. He was second behind Dortmund last time out in the San Felipe (G2) in his stakes debut. Kent Desormeaux has retained the mount and they will break from post five.

Also in the field at morning line odds of 4-1 is Bolo for trainer Carla Gaines. A dark bay son of Temple City, he has won two of his four starts. After racing on turf for the first three starts of his career, he was third in the San Felipe (G2) in his first start over conventional dirt. He has been training steadily since that race. Mike Smith, aboard for his first three starts and both career victories, will be back aboard from post four.