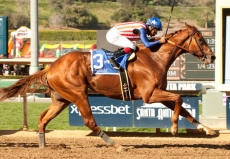 On Saturday at Santa Anita, the track will host the $70,000 Big Bear Stakes. The one-mile contest has drawn a field of six colts and geldings and will feature Dortmund in his comeback performance.

Dortmund, one of two horses in the race for trainer Bob Baffert, has been tabbed as the morning line favorite at 4-5 odds. The massive chestnut son of Big Brown has been on the shelf since finishing fourth in the Preakness Stakes (G1) and was also third behind stablemate American Pharoah in the Kentucky Derby (G1).The multiple graded stakes winner clocked a recent bullet workout at Santa Anita and will break from post five under jockey Martin Garcia.

Second choice at morning line odds of 4-1 is Point Piper for trainer Jerry Hollendorfer. A five-year-old son of Giant’s Causeway, he has been on the board in nine of his sixteen starts and is a four-time winner. He is trying to rebound after finishing fifth in the Awesome Again Stakes (G1) in his graded stakes debut in September. Rafael Bejarano will be aboard and they are scheduled to break from post three as he tries for his second stakes win.

Soi Phet looking for first win of the year

Also in the field at morning line odds of 6-1 is the veteran gelding Soi Phet for trainer Leonard Powell. A seven-year-old California-bred son of Tizbud, he is an eight-time winner though has gone winless from five starts this year. He was second in the E.B. Johnston Stakes last time out at Los Alamitos. Kent Desormeaux will be aboard and they will break from post position four as he goes for a breakthrough victory.