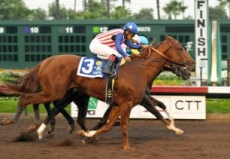 With a field of six set to contest the $1 million Grade 1 Santa Anita Derby April 4, odds-on favorite Dortmund is clearly the one to beat in the mile and an eighth race on the main track.

Trained by Bob Baffert, Dortmund (3/5) has reeled off five wins in the same number of career starts including three consecutive graded stakes victories.  The son of 2008 Kentucky Derby winner Big Brown has proven himself as one of the toughest and most versatile Kentucky Derby hopefuls winning at three different tracks and twice gutting out photo finish decisions against the well-regarded Firing Line who subsequently captured the Sunland Park Derby by open lengths.  Dortmund defeated both Bolo (4/1) and Prospect Park (7/2) in the Grade 2 San Felipe March 7 and those rivals appear to be the big chestnut colt’s main rivals once again.

Prospect Park is a rapidly improving horse, and was only beaten a length and a quarter by Dortmund in the San Felipe.  The long-striding son of Tapit may appreciate the additional distance of the Santa Anita Derby and should be making a late run once again under veteran pilot Kent Desormeaux.  Prospect Park currently ranks 20th among Kentucky Derby qualifiers and will likely need to run first or second in the Santa Anita Derby to earn a spot in the starting gates on the first Saturday in May.

Carla Gaines trainee, Bolo ran third in the San Felipe – an encouraging effort considering it was the colt’s first start on grass and his first start off a nine week layoff.  Bolo could also challenge for the win with slight improvement under Hall of Fame jockey Mike Smith.