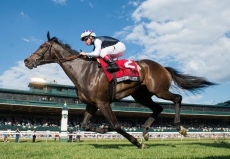 The graded-stakes schedule at Saratoga kicks off with the Diana Stakes for fillies and mares going 1 1/8 miles on the turf. In a strong field of 10, Miss Temple City has been made the 3-1 morning line favorite for trainer Graham Motion.

Consistently in the money, Miss Temple City has only failed to hit the top three twice in her 11-race career, both times when shipping over to the UK. She was fourth last out racing at Ascot in mid-June, but prior to that she took on males to win the (G1) Maker's Mile at Keeneland, scoring an impressive 108 Beyer speed figure. She's a legitimate contender here, but there's a question as to whether going over a mile could be a problem.

Trainer Chad Brown holds a hot hand for the race with four entries, including the French-bred Wekeela who is second in the ML at 7-2. A Group 3 winner in France, she made her US debut two starts back and ran well after a slow break to finish second behind superstar Tepin in the (G1) Jenny Wiley and repeated that finish last out in the (G1) Gamely over a Santa Anita track that is probably firmer than she likes.

Also from the Chad Brown barn is Dacita (5-1) who came up from Chile last summer to win her US debut on the Saratoga turf, pulling an upset over Tepin. She was fourth in the Jenny Wiley while moving well late, and comes into this off a win in the 1 1/4 mile (G2) New York Stakes at Belmont, closing into a final quarter-mile at a blazing 22 seconds flat. A longer-shot play in the exotics could be Isabella Sings (8-1) a front-runner who went wire-to-wire in solid fractions to win last out in the (G3) Eatontown Stakes at Monmouth, pulling away at the end to win by a comfortable 3 lengths.