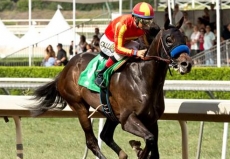 On Friday at Santa Anita, the featured race is the $75,000 San Pedro Stakes. Restricted to three-year-olds, the six-furlong contest has drawn a field of six colts and geldings.

Denman’s Call has been tabbed as the morning line favorite in the competitive field at odds of 9-5 for trainer Doug O’Neill. A chestnut son of Northern Afleet, the gelding will be trying to earn his second career victory and first stakes win. He broke his maiden at first asking in January and was third in his next outing in the San Vicente Stakes (G2). Flavien Prat will be in the irons and they will break from post position five.

Toews on Ice back from unsuccessful Oaklawn trip

Second choice at morning line odds of 2-1 is Toews on Ice, one of two horses for trainer Bob Baffert. A dark bay son of Archarcharch, he has been on the board in six of his seven starts and is a three-time winner. He was a graded stakes winner as a juvenile and is trying to rebound after finishing sixth in his three-year-old debut at Oaklawn Park. Martin Garcia will be aboard and they will break from post position three.

Mt. Veeder returning off of a layoff

Also in the field at morning line odds of 3-1 is the other Bob Baffert trainee, Mt. Veeder. A chestnut son of Ghostzapper, he was purchased for $200,000 as a yearling and has two wins from three starts. He broke his maiden in his debut and followed that up with a win in the Contender Stakes at Los Alamitos. He was sixth last time out in the Frontrunner Stakes (G1) and will be returning off a six-month layoff. Rafael Bejarano will be aboard from post four.