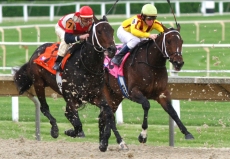 The field of seven is led by 7/5 morning line favorite General Ike who had his three race win streak snapped last out at Keeneland against open company in an $80,000 optional claiming event.  The Larry Jones trainee is a standout against this field based on his Beyer Speed Figures and has been training forwardly at Fairgrounds.  Still, the son of Quiet American has never raced over the Delta Downs strip – a disadvantage on the bullring style course.

National Defence steps up in class

At 5/1, National Defence has looked solid beating claimers and an allowance field in each of his last two starts – both of which were at Delta Downs.  The Keith Bourgeois-trained colt has improved dramatically since returning to the races in October after a two month layoff, and looks ready for the step up the class ladder. National Defence has demonstrated a closing style in his last two wins that could prove particularly useful if General Ike faces any early pace pressure.

C'Maw Charlie a horse for course

C’Maw Charlie (9/2) should break alertly from the rail under jockey C.J. Hernandez and has shown an affinity for the local strip winning three of four starts over the Delta Downs dirt.  Trained by Karl Broberg, who is currently hitting at a 26% clip, C’Maw Charlie will be looking for his third consecutive win.