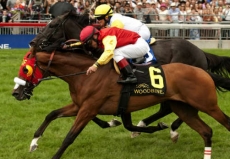 On Saturday at Woodbine, the featured race is the $200,000 Nassau Stakes. A Grade 2 event scheduled to be run at one mile on the turf, the stakes race has drawn a field of twelve fillies and mares.

Deceptive Vision tops the competitive field as the morning line favorite at odds of 3-1 for trainer Malcolm Pierce. A homebred daughter of A.P. Indy for Sam-Son Farm, the five-year-old mare has been on the board in all nine starts and is a five-time winner. She made her first start of the year a winning one in the Doubledogdare Stakes (G3) at Keeneland last time out and is scheduled to break from post position nine under jockey Patrick Husbands.

Christophe Clement will saddle Stellar Path (FR) as the second choice at 7-2 on the morning line. A four-year-old daughter of Astronomer Royal, she has won six of her fourteen starts. Last time out, she made her North American debut after competing primarily in France and Italy and won the Plenty of Grace Stakes at Aqueduct.  Luis Saez will be in the irons and they will break from post position four as she goes for back to back wins.

Overheard trying to rebound second off the bench

Malcolm Pierce will also saddle Overheard at morning line odds of 4-1 for owner and breeder Pin Oak Stud. A five-year-old graded stakes winning daughter of Macho Uno, she has been on the board in fourteen of her fifteen starts and is a five-time career winner. She is trying to move forward after finishing fourth in an allowance race in her first start off of a six month layoff and will have Eurico Da Silva aboard from post position three.n